Hello people of the world!

I have created a page on Itch.io where I am going to put the game files. Itch has some great features to make getting the game out there easier, and I am looking forward to making use of what the platform offers as the game grows. On to the business…

I have some great news:

I Played For 15 Minutes And It Didn’t Crash

Furthermore, the game is in an eminently more playable state. I cannot tell you how legit I feel. In a haze of effort and dedication, it feels like what you will soon be able to play has come together in the last few weeks.

If you saw my posts on twitter recently and noticed I was reminiscing over previous prototypes then now you know why - its been a long journey, with much more to go, but I am getting a real taste now!

That is not to say that there are not issues. Most glaring is that game windows don’t come forward when they are focused so you have to shuffle them around - other than that the new window system is sweet.

The other noticeable issue is that some buttons are sort of….

Lastly, the focus for this release has been stuff that is not settlement related because the next release is going going to do to settlements what this release did to the characters and companies - a full rework - so I am loath to waste any time cleaning that stuff up.

The other caveat about the game is that there is no AI.

You win the game if you control 65% of the settlements, or are the last family standing. Then you can play again with the same family. How high of a prestige can you get before your family line runs out?

Since you can win the game, I had to add a screen for when you are between games. Its rather simple now, but at least its consistent in presentation. (This has actually been in the game, but I am sure no one saw it. It has purple, pink and orange squares for panels)

This screen shows you the state of your family, a summary of past games, a sneak peak at future feature, and the button to play a new game. If you get to this screen, share me your screenshot please!

Characters belong to families now. Each family identifies with a settlement on the map, and proudly bears their own Coat of Arms

Characters can be realted as children/parents, full/half-siblings, and everything else of course. 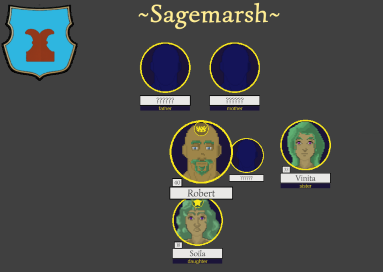 Characters can Recruit new companies of troops to raid and protect settlements. Companies need Food or their morale will decrease.

Companies can be one of two types:

LEVIES These are the Serfs of your settlement fulfilling their feudal duty to you (their lord). Levies do not require Coin, but having too many may deprive you of the Farmers you need for planting and harvesting. Also, Levy service is only short term. Levies that are not disbanded before 45 days will cause unrest in their settlement. You can extend the term of the Levy to prevent this, but the morale of the company is negatively affected.

MERCENARIES Mercenaries are available from Taverns, and will stick around as long as they are looked after. Mercenaries need to be paid on a regular basis. Alternatively, if the company raids a settlement and is succesful the Mercenaries will “pay themselves”

An idle company can Train to improve its effectiveness, and Reinforce to add new toops to the unit. Troops also improve in skill from participating in combat.

You can order one of your characters to move food from one settlement to another. Its the little things - you know, so that people don’t starve. 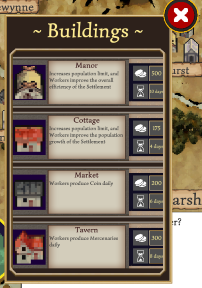 Raids destroy crops and possibly buildings. Any companies in a settlement that is being raided will respond to defend it. If there arent any companies, a character present will rally the citizens in a last ditch effort to drive off the attackers.

If there isn’t a character to lead the defense, then the settlement is taken over. Glory to the victor!

Characters now have a randomly generate portrait instead of the old preset images. Characters that are related tend to reflect that, and I am really proud of how that turned out.

When a character appears on the map, their appearance will match their portrait.

Refresh of the UI, cleaned up textures and icons. And a million other details. Safety goggles no longer required for viewing! 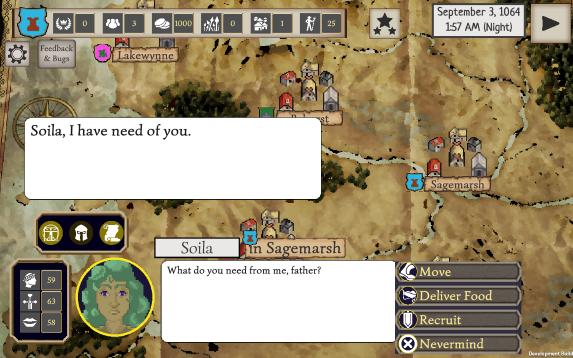 Wow, did you read all that? Awesome, thanks!

So grab the dev build if you want, or check back tomorrow when I do the proper release with the UI issues (hopeuflly) fixed! 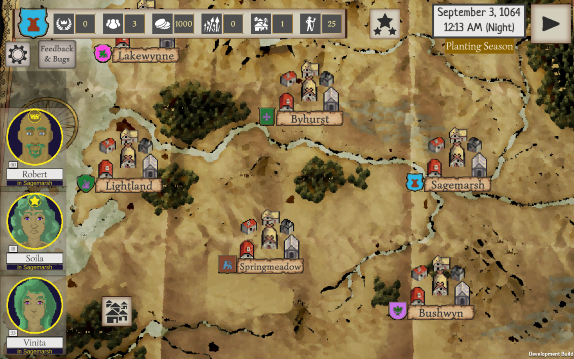 Chat with me on Discord